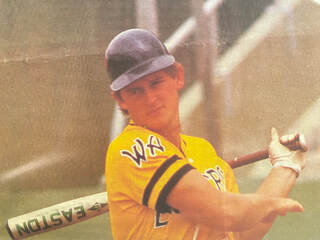 ​​A feared hitter, Doug Mateljan won multiple WA State League batting and run-scoring awards throughout the 1980’s culminating in a President’s Medal in 1985.

In 1976 Mateljan was selected to represent Australia in the Under 17 junior team and joined the Under 18 Australian junior team the following year. He became captain of the Australian “A” Under 18 team in 1978 and lead the team on the field in Florida. By the start of the next decade, Mateljan was a key member of the national side, competing at various tournaments and tours across the world.

Mateljan was a member of WA’s Claxton Shield side throughout the 1970s and 1980s and won the Mickle Medal in 1981 and 1983 and the Helms Award in 1983. During his 11-year Claxton Shield career he had a batting average of .343. After his playing career ended, Mateljan became the general manager of the Perth Heat, a role he held from 1996 to 1999.

Below is a sample of some of Doug’s achievements:
“My time in Perth was made very special by Doug and his amazing family. For them to open up their home to me was the start of an amazing stint in WA and showed their generosity and their love of our great game. The Mateljan family made my time in Perth incredibly special both on and off the field. Mat was a true champion as a player and leader both on and off the field.”
Graeme Lloyd - Baseball Australia Hall of Fame Inductee 2005

“Western Australia dominated the catching position in Australia throughout the 1970’s and 1980’s via Don Knapp and Doug Mateljan. Doug was inspirational to watch whether behind the plate or up to bat. His receiving skills and strong arm made him a fixture at the state and national levels. At the same time, he was such an outstanding hitter that whenever he wasn’t catching, he was in the lineup as a DH. He had the rare ability to hit for both power and average while rarely striking out. Truly one of WA’s all-time greats!”
Bob Ossey, Baseball Australia Hall of Fame Inductee 2017

“Doug has been an inspirational force in Australian baseball. With an unstoppable desire to win and a vault of knowledge, he has achieved much success in West Australian and Australian baseball. With his leadership qualities and diplomatic relationships, he has guided many pitchers to great success on the mound. Being a great receiver behind the plate and a formidable force with the bat, it has led to Doug securing many WA and Australian caps. It is a great pleasure to know Doug both professionally and personally.”
Mark Ettles – Baseball WA Hall of Fame Inductee  2021