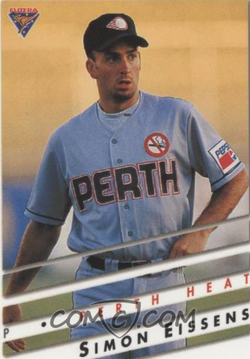 ​Born in the heart of Liverpool, Simon Eissens has represented both Britain and Australia on the international stage.  While living in Perth, Eissens has been a key part of the local pitching staff for Morley, South Perth, Swans, West Stirling and Wanneroo.

In 1990/91 Eissens made his ABL debut for the Perth Heat. Eissen’s outstanding performances at the ABL level caught the eye of the national selectors in 1991/92 with the Barcelona Olympic Qualifications in China, he was selected to represent Australia at the 1994 Baseball World Cup in Managua, Nicaragua. During 1994/95, Eissens remained dominant on the mound for the Perth Heat, finishing the season with an 9-1 record and in 1995 /96 followed up with a 8-1 record. He would continue playing for the Perth Heat until 1999.

In 1999/2000 with the emergence of the International Baseball League of Australia, Eissens would once again represent the West, this time in a Western Heelers uniform. He represented WA in the Claxton Shield competition until 2007. In that same year, Eissens represented the British National team for the 2003 European Championship in the Netherlands. He would again represent Great Britain at the European Championship in 2005, this time in the Czech Republic.

In 2006, as the sun set on Eissen’s career representing Western Australia, he held the record of 39 wins for WA/Heelers/Heat.
​
Below is a sample of some of Simon's achievements:
“Mr Consistency, Simon has been a big part of WA baseball on and off the field, from pitching nine innings to getting a car for someone or commentating on the games. Simon has always had passion with anything baseball. His pitching break out years were in the early 90’s with one of the best winning percentages with the Heat.”
Graeme Lloyd – Baseball Australia Hall of Fame Inductee 2005