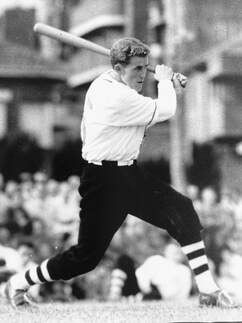 Kaye Greenham was a dominant player at all levels throughout his playing career. Greenham was a member of the Swan Districts, South Perth, East Fremantle, and Victoria Park Baseball Clubs from 1954-1984. He won five premierships with Swan Districts (1957, 1958, 1959, 1962, 1963), one at South Perth (1966) and one at East Fremantle (1974). In 1957, Greenham was the first ever schoolboy representative of the Western Australia Senior State Team and was selected in every team he was eligible for from 1957 to 1974.

Greenham was one of the first Australians to be offered a professional contract by a U.S. Major League franchise. In 1959 the New York Yankees organisation reached out to him with an opportunity to chase his dream of making the Major Leagues in America. Greenham and his family agonized over the opportunity but eventually turned it down to pursue his goal of becoming a doctor here in Perth.

Greenham was a stalwart of the Western Australian state team for almost two decades as a pitcher, hitter and infielder. He was rated by his peers in the top handful of players nationally whether on the mound, at the plate or in the field.

Below is a sample of some Kaye's achievements:​
Testimonial below from Bob Ossey & Don Knapp:
“Our baseball careers brought us to Australia in the early 1970’s and we were fortunate to play with Kaye in three Claxton Shield competitions.  We were incredibly impressed with his ability in all facets of the game (hitting, fielding and pitching). There were many talented players competing in the Claxton Shield at the time but to us Kaye stood out from the pack. We very quickly realised that the tougher the competition was, the better Kaye performed.

As good as Kaye was when we competed with him, all we kept hearing from the rest of the baseball community was “You should have seen him in his prime!” We quickly realised that this incredibly talented “older player,” as good as he was playing, was well and truly in the twilight of his career.  It would be impossible to share all the superlatives that we heard from his peers, but the words of Kevin Gartrell (WA AFL, cricket and baseball champion) sum up the sentiments expressed from those who played with and against him.

In Kevin’s words: “Kaye was the best all-round baseball player of his era in WA and easily in the top handful in Australia…simply outstanding at all levels.”

Kaye’s contribution to the sport goes way beyond his on-field playing and coaching exploits. Kaye was the highly respected medical officer for state and national teams for many years. His expertise in sports medicine was invaluable and he generously volunteered countless hours of his time to help players at all levels deal with injuries. He was made a Life Member of Baseball WA in 2018 as recognition of his huge contribution to the sport.”
Don Knapp - Baseball Australia Hall of Fame Inductee 2008
Bob Ossey -  Baseball Australia Hall of Fame Inductee 2017