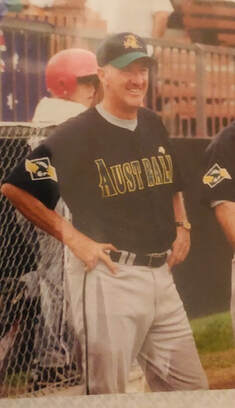 ​Don Kyle is one of the most recognisable baseball faces in Western Australia and has had an impact on virtually every player coming through the ranks in one way or another since the 1970’s. The master of the “Hot Corner,” Don first played U/17’s in 1972 and was a staple in the WA Claxton Shield Team between 1974-1984, winning four national championships along the way. In 1979 Don represented Australia in Korea and Japan.

Don was not only an elite player, he is among the most significant and admired coaches and managers Western Australia has ever produced. His work and commitment to coaching cannot be overstated and his impact on W.A.'s local talent has been enormous. Don’s coaching resume includes incredible work for the national team as well as for teams and individuals across Western Australia.

Don’s remarkable journey in baseball continues with joy and passion, while handing the next generation of baseball players on to his son, Andy, who currently serves as the Manager of the Perth Heat.

Key highlights for Don’s career include:
Testimonials from teammates and opponents:
“I was lucky enough to often have the best view in the house while watching Don Kyle perform his magic at 3rd base. Not only was he a human vacuum cleaner at the ‘Hot Corner,’ but he made putouts easy for any 1st baseman as his throws across the diamond were brilliant from any angle. Whether diving to his right, going deep into the hole, or charging a slow roller, his reflexes and skills were extraordinary. His ability to perform and make the big play in pressure situations was wonderful to watch and inspiring to teammates. Don was a selfless teammate with a contagious positive attitude…a winner as a person and a player in every sense. His ability to help his teams win with the bat, in the field and on the basepaths was inspirational while competing at club, national and international levels.” Bob Ossey - Baseball Australia Hall of Fame Inductee 2017