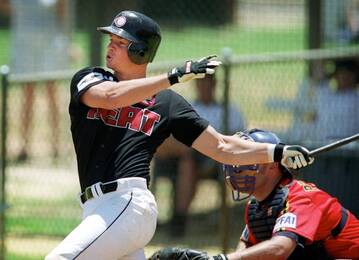 ​John Moore is part of an elite group of West Australian baseballers to play in 10 ABL seasons (1989-1999) for the Perth Heat. Moore’s baseball journey began at Perth Baseball Club where he was an integral part of four premierships during his time with the club. Moore’s talent was obvious during the 1987, 1988, and 1989 Claxton Shield which helped cement his selection into the inaugural Perth Heat team.

In the 1992/93 season, Moore became a regular starter for the Heat and in that same year was named the Designated Hitter in the ABL All-Star team. Moore’s great season earned him his spot on the 1993 Australian Intercontinental Cup team. As Moore’s form and ABL numbers continued to get stronger, he was given the honour of being part of the 1996 Atlanta Olympics Australian Team.

After the Olympics, Moore continued his career with the Perth Heat. Moore also represented the Western Heelers in the International Baseball League of Australia.
Moore is just one of 15 players to have competed in every ABL season from 1989-99.

Below is a sample of some of John's achievements:

“The most fierce, aggressive and intimidating player I ever played with or against, was very well put together man who worked extremely hard on the field and in the weight room. Moore controlled a pitching staff like no one else and always lead by example by his words and actions. Fearless, the ultimate team guy, that made you walk taller.”
Jason Hewitt – Baseball WA Hall of Fame Inductee 2021

“John was a hardnosed competitor. He led by example and developed into a great leader. Playing in the most powerful Perth Heat teams of the era, John was an integral part of the team, being the catcher and for a period the captain. His ability to bring the best out of the pitching staff he was working with was a real strength. John was also a dangerous hitter winning many games with big hits.”
Tony Adamson – Baseball Australia Hall of Fame Inductee 2005

“Tough as nails catcher, who always had your back and made you a better pitcher. His intensity out on the field always spurring you on to be and to give your best.”
Graeme Lloyd – Baseball Australia Hall of Fame Inductee 2005

“The Silent Captain. John Moore was a nature leader on and off the field. On the field he was one the fiercest competitors you will ever meet, you wanted him to be your catcher on game day because he made you better. Whether it was representing Perth baseball, Perth Heat or Australia, John gave his all for his teammates. He had your back and would run through a wall for the team (literally).”
Simon Eissens – Baseball WA Hall of Fame Inductee 2021