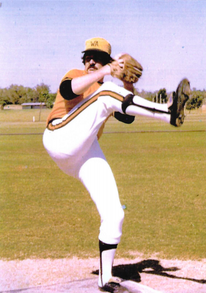 ​Neil Page is considered one of the all-time great pitchers in Australian Baseball. He was dominant at the club, state, and international levels from the early 60’s to the late 70’s. He had command of five pitches (fastball, curve, slider, screwball and forkball). He combined exceptional velocity and control with a competitiveness that intimidated opponents at all levels.

In 1974 Page decided to expand his baseball experience and moved from South Australia to Perth. His impact in three short years in Perth was extraordinary! He dominated in the State League and was the #1 starter for the state team that won two Claxton Shields in the three years that he played. During this era the Claxton Shield was contested in a tournament format with each state playing eight to 10 games over approximately a 10-day period. He was the starting pitcher in eight games over the three years and finished with a record of eight wins and zero losses.

Page was one of the first Australians to sign a professional contract with an American Major League franchise. In 1966 Page signed with Cincinnati Reds but unfortunately fate was not on his side. He sustained a serious arm injury prior to his departure to spring training and unfortunately, as surgical procedures were not as they are today (i.e. no Tommy John), his dream of the major leagues never came to fruition.

Below is a sample of some of Neil's achievements:
“Neil was a sensational left-hand pitcher with a high leg kick, great control of his fast ball, sharp breaking curve ball, and deceptive change up. He used these pitches and his baseball smarts to challenge any hitter at club ball, national league, and international games against Korea, Japan, etc. with great success. When playing in the same side as Neil he led by example and empowered you with the feeling that we had every chance of winning at any level he pitched. Whilst as an opponent, you knew you had a battle and needed to be at your best to be successful against him. An admired and respected teammate and opponent.”
David Mundy - Baseball Hall of Fame Inductee 2005

"I had the pleasure to play with and against Neil on many occasions. His mental toughness and meticulous preparation meant that you got 100% effort from him every time he was on the mound. As a young up and coming pitcher, I took notice of his strict discipline and preparation.  His dedication got him through a major arm injury that allowed him to continue his elite state and international career. Neil always saved his absolute best for the big occasion, particularly at Claxton Shield and international level. At all levels of baseball, Neil was not only a great competitor, but a great team-mate as well. I, like so many pitchers who came after him, have benefited from his readiness to impart his knowledge and encouragement for the game he loves. Australian baseball is all the better for Neil’s involvement and significant contribution to the sport.”
Colin Alexander - South Australia and Western Australia Claxton Shield Player

“In my opinion, Neil was the best pitcher I faced as a hitter or caught in my baseball career in Australia. I faced a number of pitchers in the USA that went on to play in the Major Leagues. Neil was better than most of those. He was devastating against left-handed hitters with a biting curve ball. Generally, I hit LHP’s well – not so with Neil on the mound. He had great control, a high velocity slider that broke in on the hands, and an off-speed fastball that would sink and tail away from right-handed hitters. Needless to say, it was a lot more fun catching Neil than it was facing him as a hitter.”
Don Knapp - Baseball Australia Hall of Fame Inductee 2008