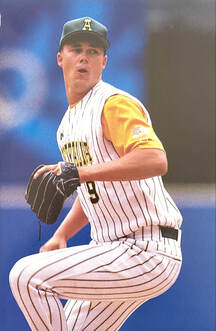 ​Tonkin is originally a product of Perth Baseball Club; a club that would not only be a springboard to a stellar baseball career, but would in time also award him life membership.

Tonkin would spend 10 years with the Perth Heat from 1989-1999 and was part of the 1990/91 and 1996/97 championship teams. Considered amongst the top pitchers of his era in a Heat uniform, Tonkin also had the honour of representing Team Australia, where he was a member between 1993-2001 including an Olympics campaign.

From humble beginnings at his Perth club, baseball would show Tonkin the world as his international duties saw him tour: Italy (1993 Intercontinental Cup), Japan (1994 4 Nation International Cup), Nicaragua (1994 World Cup), Netherlands (1996 Honk Ball Tournament), Atlanta (1996 Olympics), and Barcelona (1997 World Championships). Tonkin would also enjoy a stint of playing internationally in the Taiwanese Major League for the Taipei Gida Suns in 1999 & 2000 and also in the Italy playing for Parma in 2001 & 2002 and Rimini in 2003.

Tonkin eventually made the move from the field to the front office, where he has played a significant role in developing Baseball in WA. Tonkin has served as the CEO of BWA, CEO of the Perth Heat and has been part of the BWA Board of Directors, BWA Facility Redevelopment Committee, and currently serves as the Head of Commercial for Baseball Australia.

Below is a sample of some of Shane's achievements:
“When you absolutely needed a ‘W’ you would give the ball to Tonks and let him do his thing! He could carry an entire team on his back from the mound. Didn’t matter with Tonks, his intensity, determination and execution were the same, Perth Baseball Club in the BWA, the Perth Heat, Taiwan or for Team Australia!”
- Glenn Watson
​
“Intimidation and setting up hitters was what made Shane Tonkin tick on the mound. He’d love to throw one under the chin, then paint one on the outside edge to sit you down. His fitness was a major factor in his ability to come back on short rest (as a starter) in big games and get the job done. Always a workhorse!”
Graeme Lloyd – Baseball Australia Hall of Fame Inductee 2005

“An absolute workhorse on and off the field, the bigger the game the longer he wanted to stay on the mound and compete. He had great control of all his pitches on any count and was not afraid to challenge you and throw one under your chin. An absolute winner and great teammate who left it all on the field. He would take the ball in the 1st inning and still be out there in the 9th inning some 150 pitchers later, he was a machine!”
Jason Hewitt - Baseball WA Hall of Fame Inductee 2021