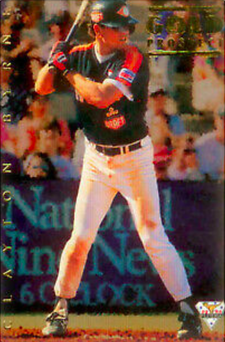 Byrne was introduced to the game by father and Baseball Australia Hall of Fame member, Rod Byrne. His baseball journey began at the Wanneroo Giants in the late 1980’s. As a teenager, he was selected to the Australian National u/19’s team and made his ABL debut for the Perth Heat in the 1989/90 season. Byrne’s talent was recognised by the Baltimore Orioles and, in the US Summer of 1991, Byrne debuted for the Bluefield Orioles in the Appalachian League and lead the league in stolen bases. That year, Byrne made the League All-Star team as an outfielder.

Byrne lived the endless summer, bouncing between the Baltimore Orioles organisation and the Perth Heat for much of the early to mid 1990’s. Byrne’s prowess as a batter was on full display in 1993/94 as he finished 4th in the league batting title behind former big leaguers Homer Bush, Dave Nilsson and Greg Jelks. 1995 marked Byrne’s last season with the Orioles oragnisation, peaking with the AAA Rochester Red Wings.

Byrne represented Australia in the 1997 Intercontinental Cup in Barcelona, where he had a memorable final at bat against the USA. Byrne drew a walk, forcing in a run and Australia won the Bronze Medal.

Byrne played for the Melbourne Monarchs in 1997/98 before moving back to Perth to play for the Western Heelers of the International Baseball League of Australia. Clayton's final curtain as a player may well be his greatest achievement with his selection on the 2000 Australian Olympic team.

Below is a sample of some of Clayton's achievements:
“Clayton had one of those great accurate arms that always had him top in assists, with a power bat to go with it.” Graeme Lloyd - Baseball Australia Hall of Fame Inductee 2005

“One of the most naturally gifted baseball players I have ever had the privilege of playing with and against.”
Simon Eissens – Baseball WA Hall of Fame Inductee 2021

“I witnessed Clayton develop as a player and a person through playing with and coaching him. Clayton was a true five-tool player. These abilities allowed him to sign with the Baltimore, progressing through the minor leagues ultimately playing at the Triple-A level. Clayton was a pioneer for many of our young professionals today.”
Tony Adamson - Baseball Australia Hall of Fame Inductee 2005

“I grew up with Clayton Byrne playing on many junior teams with him at Wanneroo and West Australian state teams followed by some time at the Perth Heat and the Western Heelers. From an early age his talents were evident, and he developed them further as his career went on. Combining a unique toolset of strength, athleticism, power and explosiveness, there were not many things that Clayton couldn’t do or achieve on a baseball field.”
Kevin Hooker - Baseball WA Hall of Fame Inductee 2021
Copyright Baseball WA 2022
Website By