The Basics of Home Plate and Basepath Construction
​Generally, the construction and maintenance of the baselines should be the same as that of the infield clay area. The depth of the baseline clay material should be consistent with the infield material. Once again try to incorporate a blend of 60 percent sand and 40 percent clay. The baseball rule book states, the baseline should be six feet wide with three feet each side of the line. This varies throughout Major League Baseball. I prefer a baseline that is five feet wide with two feet on the fair side and three feet on the foul side. This reduces the amount of clay to maintain on the field and forces groundskeepers to hand work the baseline instead of driving equipment up the line.

If you are using a cut out basepath of clay infield material in a turf field, stretch a string line first along the inside edges and then along the outside edges of the basepath to insure a straight edge as you cut away the existing turf. Remove enough soil to install the clay infield material. (A five-inch depth should be sufficient.) Use a level and the edge of a board to insure as flat a basepath surface as possible. Once installed, the top surface of the clay infield material should be even with the crown of the grass plants in the turf. This provides a smooth transition for the players from the basepath to the turf.

The first base line is used frequently during the game. Keeping it smooth is a challenge and will be discussed in future issues. The home plate construction and installation is similar to the mound construction in that it uses two different clays. The radius of the home plate area is measured at 13 feet out from the back tip of home plate. This results in a circle with 26-foot diameter that will be filled with clay material. The depth of the 60 percent sand and 40 percent clay material that is used around the perimeter of the batters box is roughly five inches. The depth of the harder clay – 40 percent sand, 20 percent silt and 40 percent clay – that will be used for the construction of the batters box will be five inches as well.

To find the location of the batters box (which is where you will place the hardest of the two clays) you need to locate home plate and have it available for installation. The batters box area is comprised of two six foot by four foot rectangles, one to the right, the other to the left of home plate, with the six foot edge parallel to it and each other. Each six foot by four foot rectangle is located six inches from the outside edge of home plate. The centre of the six foot side should be even with the point at each side of home plate where home plate angles back to form the triangle which ends at the apex.

You may decide to build wooden frames to set up the batters box area, or you may find it easier to stretch string around the perimeter of it. For construction, plan on extending each batters box rectangle by six inches on all four sides. You’ll want the harder clay in this extended area to stand up to the wear of play. This extension produces a rectangle five feet by seven feet and extends the inside edge of the hard clay area on both the left and right to the edge of home plate.

If you have been able to find an adequate clay source, you may prefer to extend the area for the harder clay into that extra “strip” of area behind and in front of home plate and equal to the length of the batters boxes. The rest of the area within the 26 foot circle will be filled with the “softer” clay material. In building the batters box area, start from the bottom up, adding clay in one inch layers at a time. Moisten and compact each layer as it is placed, gradually building up to the proper level. Prior to play, the six foot by four foot batters boxes should be outlined with white chalk or white field paint. The home plate area should be relatively flat, with home plate itself level with the surrounding clay material. Some groundskeepers have sloped the home plate about ½ a percent towards the backstop to help the water run off the tarp. Use a level and board to ensure that home plate and the batters box areas are as flat as possible.

When the home plate is not in use, it should remain covered to keep moisture at a consistent level. The actual batters box lines that are shown in the rulebook are boxed in and a catchers box is also installed. This practice is not commonly used today. 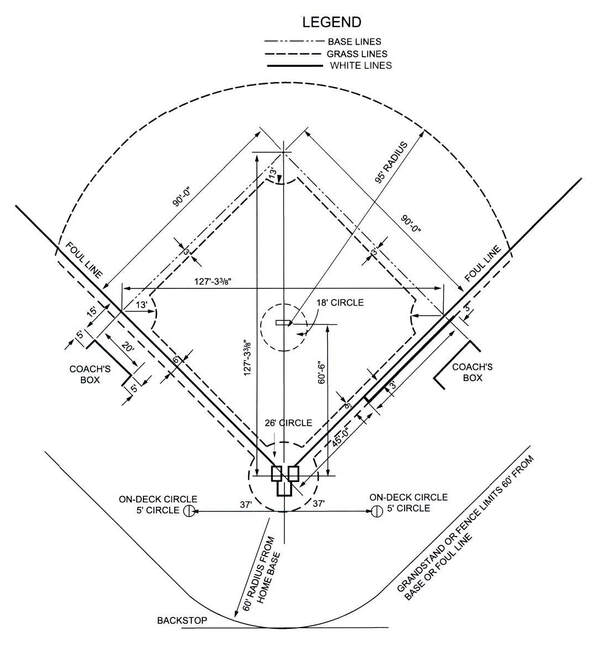 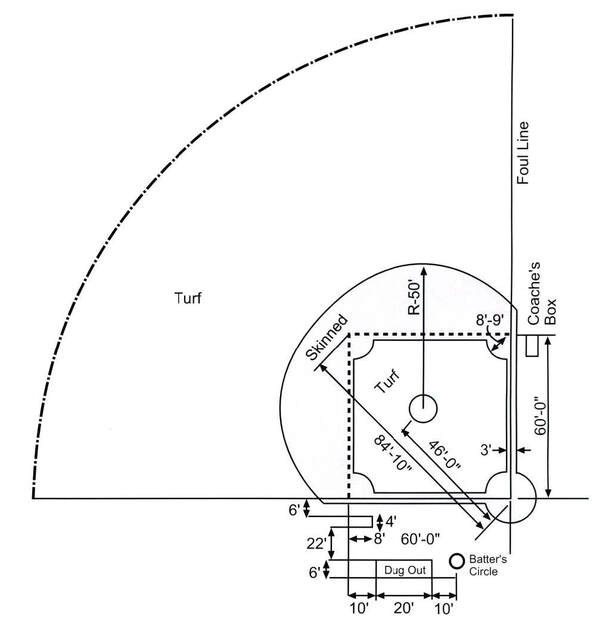 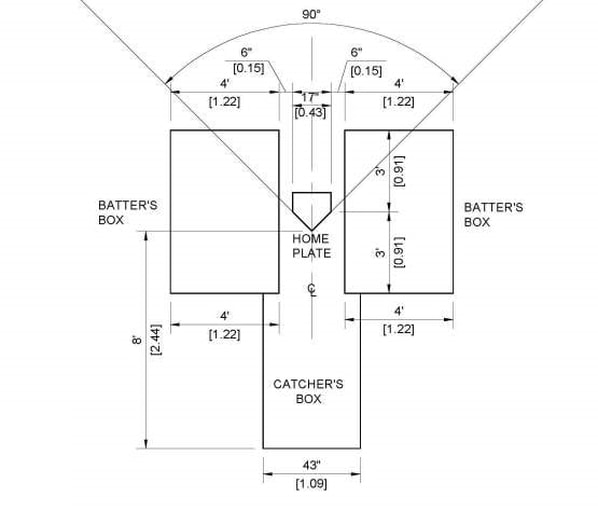