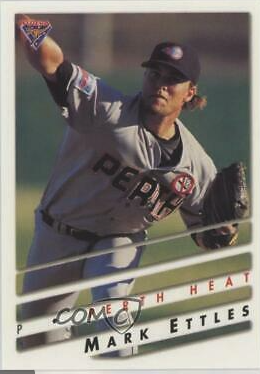 Mark Ettles was the first West Australian to play Major League Baseball in the USA. He was a pioneer and role model for young players, thus paving the way for other West Australians to embark upon a professional career. He demonstrated that, with dedication and application, a career at the top was an achievable goal. Ettles was a tenacious competitor, combining a great work ethic with a “never give up” attitude that set a great example for all his teammates.

As a young player, Ettles was an outstanding fielder, hitter and pitcher in the State League.  Soon after embarking on his Claxton Shield career in 1985, he became an elite closer at the national and international levels with the development of a wicked splitter, sharp breaking curveball and an above average fastball. He represented WA in the Claxton Shield via the State Team and the Perth Heat every year that he was available between 1985 and 1998.

In 1989, while playing collegiate baseball at the University of West Florida, Ettles caught the eyes of major league organisations and signed a professional contract with the San Diego Padres. In 1993, the Padres promoted Ettles to the Major Leagues . During that season he became the first West Australian (and second Australian behind Graeme Lloyd) to be credited with a Major League Baseball win as a pitcher.

Below is a sample of some of Mark’s achievements:
“We knew that if we had a lead towards the end of a game we were in great hands with Mark coming out of the bullpen. His sheer determination, hard work and talent enabled him to reach the highest level of our sport.”
Graeme Lloyd - Baseball Australia Hall of Fame Inductee 2005

“Mark was always hungry to learn and was never afraid to work hard. He was a closer with a major league curve ball and a very nasty splitter. Mark was also a great competitor with an ability to get out of the tightest of jams under pressure situations. His career at the top was short, but what an accomplishment to get there.”
Paul Gonzalez - Former Team Australia Player

“Mark was a pioneer in professional baseball from a WA perspective. He always did his best to come back to
Australia during the northern winter and play for the Perth Heat in the ABL. He was an elite closer in our league and a big part of the Heat’s success in the 90’s. He was a wonderful teammate and had a competitive attitude on the field that was infectious.”
Tony Adamson - Baseball Australia Hall of Fame Inductee 2005

“Mark’s ability to come to the mound late in the game and shut down the opposition was so effective we started to take it for granted. His splitter was so good that it made some of our country’s best hitters look ordinary. He was dominant, exciting, and unique for his time.”
Kaye Greenham, Baseball Australia Hall of Fame Inductee 2014

“Mark made the absolute most of his abilities and natural talent. Mark surprised a lot of people when he got to the major leagues. However, those who knew him were aware of three qualities he had that gave him an edge: he was a keen student of the game, he was a risk-taker and prepared to experiment and he was a great competitor and team guy. I always admired the fact that playing for Australia was just as important to Mark as making it to the major league level with the Padres.”
Don Knapp, Mark’s first State League coach – WA Brewers, Baseball Australia Hall of Fame Inductee 2008
Copyright Baseball WA 2022
Website By