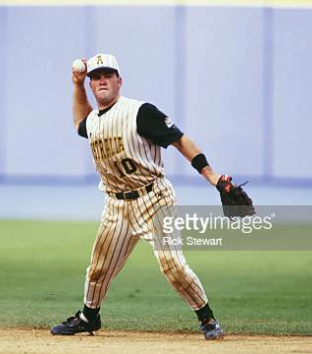 ​Hewitt began his baseball career with South Perth Baseball Club. He was a "one club" player for the next 15 years.  At the age of 17, Hewitt made the leap from State League to the ABL, debuting with the Perth Heat in the 91/92 ABL season.

In 1994 Hewitt’s star would continue to rise as he became the youngest player selected for the Australian National Team in the 1994 Baseball World Cup held in Managua, Nicaragua.

Between the years of 1994 -1996, he would continue to put in dominate performances for the Perth Heat, which culminated in Hewitt again being the youngest player selected for Team Australia in the 1996 Olympics held in Atlanta. Hewitt’s Olympic performance against the eventual winners, Cuba, was the most significant of the tournament. He was Australia’s lead-off hitter and reached base in all five at-bats, scoring twice.

Hewitt continued in the Australian Baseball League after the Olympics, including an impressive stint with the Adelaide Giants in 1998-99, before finishing his professional career in 2002 for Western Australia in the Claxton Shield.

Below is a sample of some of Jason's achievements:
“I first saw Jason as a young man 17 years old being a sponge listening to Greg Jelks’ every word. Jason never took a step backwards and was such a fierce competitor on the field.”
Graeme Lloyd – Baseball Australia Hall of Fame Inductee 2005

“I had the pleasure of coaching and playing with Jason, he was a ferocious competitor who displayed a team first ethos. Jason has had a massive impact on baseball in WA and Australia during his playing days. He then continued to contribute with his many coaching endeavours, also giving our young talent an opportunity in professional baseball through his scouting with the Cincinnati Reds.”
Tony Adamson – Baseball Australia Hall of Fame Inductee 2005

“Taken under the wing of Greg Jelks and having some greats of South Perth Baseball Club around him, Jason turned himself into a solid top order left-handed bat and great infielder that would dive and do anything to keep the ball in front of him for his team. Jason always wanted to win, and when you didn’t, he made sure you knew he wasn’t happy about it! I should say sorry for when I threw a fastball to a Cuban #3 hitter at a World Cup one year that nearly took his head off, but that will never happen, and he will never ask!”
Shane Tonkin - Baseball WA Hall of Fame Inductee 2021

“Jason Hewitt, the ultimate competitor who gave everything he had every time he stepped onto the field and was able to maximise his talents and turn them into immense baseball success. I had the pleasure of playing with and against Jason during my time in Australian baseball and it was my privilege to compete against a man with such a burning desire to win. A blend of speed, infield defence and the ability to grind out every at bat made Jason a complete player who had an extremely successful career at the international, national and state level.”
Kevin Hooker - Baseball WA Hall of Fame Inductee 2021
Copyright Baseball WA 2022
Website By