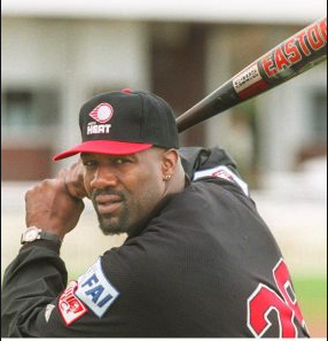 In 1993 Jelks first appeared for the Perth Heat where he immediately became an iconic figure. His booming bat and class were admired by all who played against him, with him or watched him from the stands.

Locally, Jelks was an enormous presence for the Melville Braves, South Perth Cubs, Morley Eagles and Carine Cats as both a player and a manger.

Below is a sample of some of Greg's achievements:
“It was obvious his baseball ability was unlike anything we had seen before. Greg adopted Australia as his second home and became part of the baseball family. He went onto represent Australia many times. As dominant as he was on the field, one of his major strengths was the impact he had through coaching at many levels, and his continued promotion of baseball. Greg was loved by many.”
Tony Adamson – Baseball Australia Hall of Fame Inductee 2005

“Just saying that name sends shivers down pitchers and third basemen spines everywhere!
Greg was a baseball player, the most feared hitter in the league swinging the black magic.
Great teammate, better friend, always had your back.”
Graeme Lloyd – Baseball Australia Hall of Fame Inductee 2005

“The most influential baseball player or person I ever played with or against, you walked taller
as a teammate of GJ. He would tap the plate and stare you down and then make a pitcher pay. He would always leave the top two buttons undone on his jersey that only added to the aura of the man. The ultimate teammate and competitor that would put the fear of death in any pitcher and opposition player just by his presence, opposing teams would come out of the clubhouse just to watch his batting practice. A massive loss to the game in Perth and Australia.”
Jason Hewitt - Baseball WA Hall of Fame Inductee 2021

“Greg was one of the most feared hitters in Australian baseball history swinging a 35inch aluminium bat that not only worried pitchers, it scared the hell out of some 3rd basemen along the way. He was the spark in the team, he knew how to fire up the dugout and lead by example. Off the field was the same, an electric person that was loved by all and he would always go out of his way to spend time with people in need. The late great man will never be forgotten for his presence both on and off the diamond!”
Shane Tonkin - Baseball WA Hall of Fame Inductee 2021
Copyright Baseball WA 2022
Website By