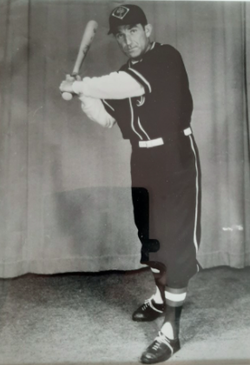 McPherson was famous for his “look out!” pitch, which was aimed at the batter’s head. He would shout “look out!” as the batter jumped back as the ball would break down and away to enter the strike zone. A great legend and a wonderful throwback to the old days of Australian baseball!

“I had the pleasure of meeting and chatting with Ron in the early 90’s when I joined the Perth Baseball Club as a player/manager. The minute you join the Perth Baseball Club you become aware of the huge impact Bandy had on the club and WA.”
Glen Watson - Perth Baseball Club
​
“Ron ‘Bandy’ MacPherson....superlatives are hard to find when describing Bandy’s contribution to Australian and WA baseball in the 50's and early 60’s. He was already a household name in NSW and ultimately a Baseball Australia Hall of Fame Inductee. He came to Western Australia in 1954 and played and coached the Perth Club off and on through to 1963. His playing and coaching ability saw Perth halt the 7-year premiership run of Swan Districts in 1960. His showmanship and personality, plus elite baseball skills, put night baseball at the WACA (radio broadcast by Oliver Drake Brockman) on the map. He was baseball’s answer to "the greatest showman!”
Darryl Moyle – Baseball WA Hall of Fame Inductee 2021
Copyright Baseball WA 2022
Website By