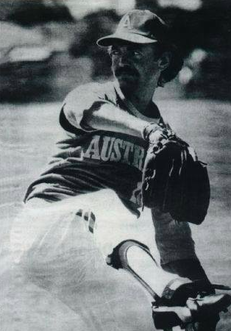 Ray Michell was a highly decorated baseball figure in Australia throughout his career. He represented WA in 13 Claxton Shield teams from 1973 to 1990. He represented Australia numerous times both domestically and abroad between 1973 and 1986. Michell was the first Australian player to receive a major international award, claiming the Pitcher of the Series trophy at the International Seoul 5 Nation Series in Korea in 1980.


Below is a sample of some of Ray’s achievements:


“Always a winner, Ray didn’t know what losing was. As Australia’s #1 lefty, he was tough on both right and left-handed hitters. Many right-handed hitters were sent back to the bench after swinging at Ray’s curveball that started over the middle of the plate but ended up nearly taking out their right ankle. He was a wonderful teammate and a very difficult adversary.”
- Don Kyle

“I had the pleasure of playing against and alongside Ray since his Claxton Shield debut as a 17-year-old, watching him develop into the dominant pitcher he was. His work ethic to hone his skills and become the best he could possibly be is unsurpassed. In my mind he is the very best WA-grown pitcher of all and I believe, if given the opportunity, he would have been a success at the highest level of professional baseball.”
- Darryl Moyle

“Ray was Western Australia’s and Australia’s number one left-handed pitcher for many years. His best pitches were a  late-breaking curveball and sinking fastball that were equally difficult on both right and left-handed hitters. He had the ability to throw these pitches on any count, from different release points and with pinpoint control. On top of having elite “stuff,” there were very few pitchers I witnessed who were more competitive in big occasions than Ray.  He was never afraid of the moment whether pitching for his club, the state or country. One of our sport’s true legends!”
-Bob Ossey