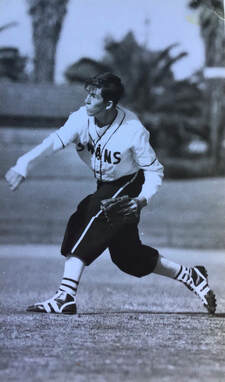 Mel O’Hern is considered one of the all time greats of the Swan Districts Baseball Club. As a player, O’Hern spent 15 seasons at the club (from 1955-1970), where his ability to both pitch and play multiple positions garnered O’Hern a host of accolades and prestigious awards.

In 1961, O’Hern debuted for Swan Districts in A Grade (State League) as both a pitcher and short stop. As his game continued to develop at the A Grade level, O’Hern would go on to represent Western Australia in the Claxton Shield for the first time in 1962. During the 1962 Claxton Shield series, it was not only his pitching that would get attention, but also his hitting. With bases loaded in the first inning v South Australia, O’Hern hit a long and memorable Grand Slam. In 1963, again representing Western Australia, O’Hern would pitch 18 innings against NSW in a 1-1 draw. 1963 would also be the first year that O’Hern would represent Australia on the mound.

O’Hern represented Australia once again in 1972/73, this time as a second baseman in the Asian Baseball Championship series played in Manila, Philippines.

Below is a sample of some of Mel's achievements:
“The Claxton Shield in 1973 was played in Perth. I was 11 at the time and loved hanging around the back of the dugout of the WA Team. Mel O’Hern was my favourite player. In my mind he was the greatest second baseman of all time! I would run to the drink caravan on the hill to buy him a can of Pinto and he’d let me keep the 4 cents change. Little did I know that 5 years later I would be playing second base for Vic Park and Mel playing second base for West Stirling. A true legend and gentleman of baseball in Western Australia.”
Glenn Watson

“I had the distinct pleasure of playing with Mel as a teammate at our local state club and also when he represented W.A. in the Claxton Shield. He was extremely gifted as both a pitcher and second baseman. Highly skilled and never flustered, Mel was always calm and extremely efficient. He was a wonderful player for his state and Australia and was highly respected by all who knew him.”
​Kaye Greenham – Baseball Australia Hall of Fame Inductee 2014
Copyright Baseball WA 2022
Website By