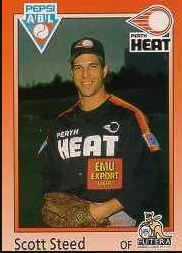 Hailing from Granada Hills, California, Scott Steed burst into the West Australian baseball scene in 1983 as one of the most exciting import players of his era. During his time at the State League Level, Steed spent six seasons at Victoria Park, two seasons at Morley, and two seasons at South Perth.

In 1985/86 Steed first represented Western Australia in the Claxton Shield, when WA beat Victoria and only missed one Brewers Claxton Shield Team before moving to be part of the inaugural ABL Perth Heat in their 1989/90 season.

Steed was known for his electrifying speed in the outfield, power at bat, and a rocket arm that always made baserunners think twice before advancing bases. As well as representing WA, Steed represented Australia at the 1993 Intercontinental Cup in Italy.

Below is a sample of some of Scott's achievements:
“Scott Steed, what a player he was. I've known Scott for 40 years, we both played junior college ball at Lane Community College back in Eugene, Oregon. Since that time, I knew Scott would achieve success. Run! Hit! Field! Scott made every pitcher happy to see him in centre field. He covered foul line to foul line. When at bat, every single he turned into a double, every double he turned into a triple - not to mention the long ball when needed. Scott never shrugged a challenge and the greater the challenge the more you got out of Scott. He had only one motto: WIN. You won't ever witness a centre fielder of his calibre again. I think most baseball purists in WA would agree. Congrats DeeDee well-deserved.”
Dave Rusin – Baseball WA Hall of Fame Inductee 2021

“I didn’t know what Tums was before I met Scott! He might have had butterflies before games but once it started, he was one of the spark plugs that would fly around the bases, setting the table and making things happen with his speed.”
Graeme Lloyd – Baseball Australia Hall of Fame Inductee 2005

“One of the most dynamic, intense, and aggressive baseball players I have ever seen in
Australia. As a leadoff hitter, he had the ability to hit for average and power, and if
infielders played too deep he would bunt for a base hit then steal 2nd & 3rd base. Explosive speed,
who always ran the bases like there was no tomorrow. He’s a guy that just loved stealing bases
and challenging the best catchers in the game, tracked down everything in CF and beyond
with an absolute cannon for an arm. Steedy played with flair and confidence and loved to compete.
He would talk the talk and walk the walk.”
Jason Hewitt - Baseball WA Hall of Fame Inductee 2021
Copyright Baseball WA 2022
Website By