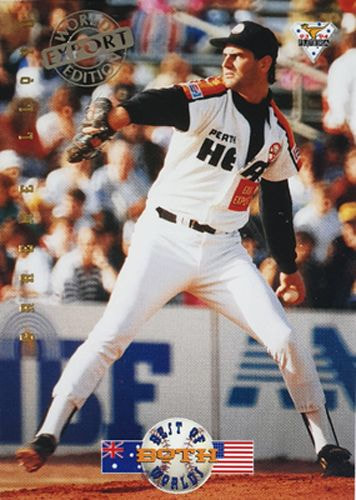 Hailing from Geelong in Victoria, Lloyd’s career took off when he was chosen to represent his home state at the age of 19 and in that same year represented Australia at the World Cup in Japan. The following year he was spotted by scouts working for the Toronto Blue Jays who signed him to his first professional contract in January 1988. After almost five seasons in the minor leagues, Graeme made his U.S. Major League debut with the Milwaukee Brewers in 1993.

During the 1990-91 season, the Perth Heat acquired Lloyd’s services to compete in the ABL. He was used as a starter in all nine of his outings for the Perth Heat. He pitched four complete games, posting a 6-1 record with a 2.62 ERA. He was a pivotal member of the Claxton Shield-winning Perth Heat who won the deciding Game 5 of the 1990/91 Championship Series on the back of Lloyd’s pitching. In more recent years, he has been a member of the coaching staff at the Perth Heat and was the Pitching Coach on the 2008 Claxton Shield Winning Team.

Lloyd is perhaps the most decorated Australian to have played Major League Baseball (MLB) with a career spanning over 11 years across seven clubs – Milwaukee Brewers, New York Yankees, Toronto Blue Jays, Montreal Expos, Florida Marlins, New York Mets and Kansas City Royals. He is a two-time World Series champion, winning titles with the Yankees in 1996 and 1998, becoming the first and only Australian to have won a World Series ring.  Lloyd was used exclusively as a relief pitcher during his ten seasons in the major leagues, ending his career with 30 wins against 36 losses, 17 saves, and 97 holds. He appeared in a mammoth 568 regular season games and had a spotless 0.00 ERA in 13 postseason appearances, including a win in Game 4 of the 1996 World Series.

Lloyd missed the entire 2000 season while recovering from arthroscopic surgery. In 2001, he received the Tony Conigliaro Award, a national recognition instituted in 1990 by the Boston Red Sox to honour the memory of the late Tony Conigliaro. It is given annually to a Major League Baseball player who best "overcomes an obstacle and adversity through the attributes of spirit, determination, and courage that were trademarks of Conigliaro."

In 2004 he was a member of the Australian team that won the Silver Medal at the Athens Olympics. Lloyd pitched in four games in Athens. His experience and leadership were a huge boost in assisting Australia’s excellent pitching squad. The silver remains Australia’s only baseball medal from the Olympics.

Recently Graeme looked back on what baseball has meant to him and his favourite memories from his career: “Baseball has given me the most amazing experiences of my life, from the depths of despair to the absolute euphoria of reaching the pinnacle of sport. It has opened my life up to the different cultures of the USA, Mexico, the Czech Republic and pretty much everywhere else in between. The dynamics of the game do not change, it’s still you against a hitter and the competitiveness that goes with it”.

Below is a sample of some of Graeme’s achievements:
I had taken notice of Graham as an under 18 National Team player. I felt his potential was unlimited and considered him a must-have player early in the history of the Perth Heat Franchise. By memory we got him to Perth from Melbourne initially for the cost of transporting his old Holden Ute across the Nullarbor – not sure if that Ute ever made it back to Melbourne! A wonderful teammate, an aspect I admire so much about Graham is the importance he has placed on Australian Baseball over the years. Yes, he had a great MLB career, but I suspect the Silver Medal the Australian Olympic Baseball Team brought home from Athens is as cherished as the two World Series rings Graham earned with the Yankees. I am pleased that Baseball WA, the Perth Heat, and the Australian Olympic and National Teams are such significant components of the Graham Lloyd legacy.
Don Knapp – Baseball Australia Hall of Fame - 2008

Of all the players I have played with over my years, Graeme was one of the most talented players I had the privilege of learning from, his actions spoke louder than his words. Softly spoken (until he came out of the bullpen), Graeme was one of a handful of players who took his natural talent and reworked it year in and year out, so that opposition hitters basically didn’t have a clue what he was going to do next. He inspired me to work harder and trust those around me who knew the game better than I ever will. He inspired a generation of baseball players to be better.
Simon Eissens – Baseball WA Hall of Fame Inductee - 2021

Graeme has etched his name into Australian and American baseball history. His early pioneering career has opened many doors for young aspiring Australian baseball players. With many accolades to his name, they do not showcase what a gentleman he is off the field. On field he has the tenacity of a pitbull and will do all he can to secure success for his team. His job is to sit down opposition players which he achieves with focus and drive. Having known Graeme for many years, he is one of a few I would have sitting in my foxhole. It is an absolute honour to know Graeme both professionally and personally.
Mark Ettles – Baseball WA Hall of Fame Inductee - 2021
Copyright Baseball WA 2022
Website By