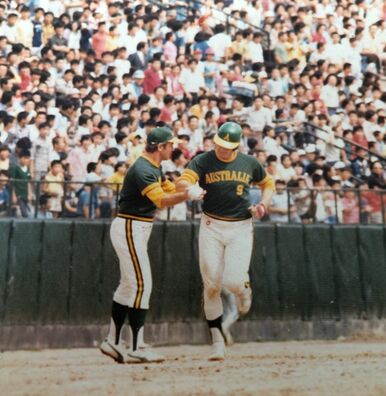 ​​Larry Home was a highly-decorated Claxton Shield Player across three jurisdictions from 1971 to 1982 (Queensland, Western Australia and New South Wales) . Home was a mainstay in the national team as a middle order power hitter for 10 years from 1972 until 1982. He hit several game winning home runs while competing against Asian powerhouse teams. Unfortunately for Australian baseball, his commitments as an officer in the Australian Army precluded most tours with Australian teams. Thus, in 1983 while still in his prime, he decided to declare his international baseball career over.

Home played club baseball all over the country, competing at a local level in Queensland, Victoria, Western Australia, New South Wales and the Australian Capital Territory. In WA, Home competed for Victoria Park from 1980 to 1983, winning a premiership in the 1981/82 season. Continuing his trade at a local level in WA, he coached juniors and seniors at Wanneroo from 1998 to 2006. During this time Home won State League premierships with the Giants in 1998/89 and 2002/03 and was honoured with being named coach of Wanneroo’s 40-year anniversary All-Star Team.

Below is a sample of some of Larry’s achievements:
“Larry was the best hitter I played with or against during my time in Australia. He had the ability to hit with immense power to all fields while, at the same time, rarely striking out. Larry was at his best in the toughest of situations against the best pitchers. His combination of confidence, aggressiveness and elite talent enabled him to come through time and again when a game was on the line whether at the club, national or international level. I have had the opportunity to play with and against many players who went on to succeed at the Major League level. In my opinion, Larry was as good as, or better than, most of these players. He is without a doubt, one of the all-time greats of Australian baseball.”
Bob Ossey - Baseball Australia Hall of Fame Inductee 2017