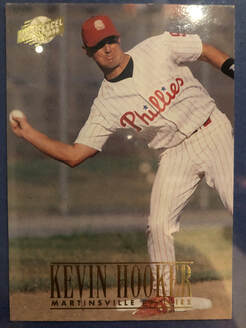 ​Kevin Hooker was a staple in West Australian state junior teams and in 1987 debuted for Wanneroo Giants in State League. Hooker’s talent was obvious to state selectors and he first represented Western Australia at the Claxton Shield level in 1988 for the WA Brewers.

Hooker took his talents to the US, playing at the prestigious Oregon State University and continuing the incredible baseball relationship that has been forged between Oregon and Western Australia. After his college stint, he went on to be selected by the Philadelphia Phillies in the 31st round of the 1995 Amateur draft. In his time with the Phillies organisation, he spent time between the Martinsville Phillies and Piedmont Phillies. Hooker was amongst the offensive leaders in the Appalachian League and was named in the Appalachian League All-Star team as the second baseman.

Returning to Perth, Hooker put on the Perth Heat uniform from 1995-1997. In 1997, he took over the coaching role of Wanneroo Giants, his junior club, who at the time were cellar dwellers. He produced one of the most dominant individual seasons in WA baseball history and steered the club to its first-ever State League Championship, following it up the next season to go back to back.

Hooker also played in the 1999/2000 International Baseball League of Australia for the Western Heelers.

After his playing career, Hooker served as a scout for the Philadelphia Phillies and currently serves as the Pacific-Rim scout for the Detroit Tigers.

Below is a sample of some of Kevin's achievements:
“Kevin was appointed club coach and State League player/manager at Wanneroo 1996/97 and tasted success immediately with a premiership in his first year. Throughout his tenure, Wanneroo was consistently a significant force in the WA competition due to Kevin’s high standards, leadership and outstanding personal ability defensively, offensively and tactically. He was the most feared hitter in WA and, although he rarely pitched, won the deciding game three of the 1998/99 grand final. Another premiership in 2002/03 followed.
Scouting started to encroach on his playing/managing career when he was signed as an Asia Pacific scout by the Philadelphia Phillies in 2002. He finished at Wanneroo after the 2004/05 season. Kevin has been a hardworking, talented and successful evaluator signing Major Leaguer Brad Harman (VIC) and Tim Kennelly amongst others. In 2009 he moved to the Detroit Tigers as Pacific Rim Coordinator, signing Major Leaguers Brad Thomas (NSW) and Warwick Saupold, as well as Asian players who made the Major Leagues. Kevin continues in that role today.”
Larry Home - Baseball Australia Hall of Fame Inductee 2005

“One of the best baseball minds in Australian baseball as a player, coach, or scout I have been around. If not for injury he would have been a big leaguer in my mind for sure. A great hitter, pitcher, and infielder that would never back down from a challenge and dominated club ball in WA in the late 90’s and early 2000’s. Kev embraced and loved the banter on the field and at times just looked at you and smiled with an air of confidence. I would have walked him with the bases loaded and up by two late in the game as it was a safer option. A lot of respect and admiration for Kev as a coach, teammate and opposition player.”
Jason Hewitt - Baseball WA Hall of Fame Inductee 2021

“Kevin Hooker has accomplished so much in the game of baseball spanning all levels in Australia and overseas. My friendship with Kevin goes back to 1989 when he arrived in Corvallis, Oregon as a very talented two-way player from a land far away. His skills were on show from day one. Not only could his 150lb. frame deliver pitches in the upper 80's, but he could hit and run like few others at our level. His stock accelerated quickly and the word was out - he was offered a scholarship to Oregon State University.
Drafted by the Phillies in '95, his numbers in Martinsville, VA in his first summer out were those of legends, and he was quickly promoted. Had he not injured his shoulder while diving at Perry Field the following summer, I firmly believe his bat would have made a sincere run at the Big Leagues. This man could really, really hit. He's won at all levels as a player and a coach. It's been a privilege to be part of so many special teams where he was clearly the most talented player on the field. Deserving recognition for one of the best to play the game.”
Brooke Knight