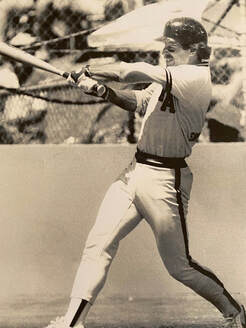 Bob Ossey arrived In Australia in September 1972 at the age of 24 on a sponsorship agreement facilitated by key baseball supporter and businessman Kevin Parry. He was assigned to the Victoria Park Baseball Club as a coach/player and ended up playing for the club for 12 seasons (10 as captain/coach) until he formally retired from club baseball in 1985. The club won four premierships and reached the finals in eight consecutive years during his reign as captain/coach.

Ossey was selected in every WA Claxton Shield team for which he was available from 1973 to 1985. He retired from interstate baseball during the 1985 season.  He became an Australian citizen in 1978 and subsequently represented Australia on official touring teams (both domestic and overseas) until retiring from international baseball in early 1980.

Ossey was considered by his peers across the country to be in the top handful of hitters in Australia during his playing career and was arguably the best left-handed hitter in the country throughout the 70’s and early 1980’s. He was a mainstay in either the 3 or 4 spot in the lineup whether playing for WA or Australia.

Perhaps Ossey's most significant contribution to baseball in WA (aside from playing) was as a result of his vision for a purpose-built baseball stadium in Perth. In 1977 Ossey started, spearheaded, and drove the campaign to build a facility in Belmont which eventuated in the establishment of Parry Field Ballpark in 1982.
​
Below is a sample of some of Bob’s achievements:
“I had the privilege of playing against, with and for Bob during the 70’s and 80’s. He could do it all and was a potent force both offensively and defensively.  He was certainly a dominant player in Australian baseball over many years.”
Larry Home – Baseball Australia Hall of Fame Inductee 2005

“Bob was one of the best and most competitive players I had the honour of playing with and/or against. He was the most technically correct and toughest left-handed hitter I ever faced in Australia.”
Neil Page – Baseball Australia Hall of Fame Inductee 2005

“Bob was considered by his peers across the country to be in the top handful of hitters in Australia during his playing days. Bob was especially clutch during big game situations against the toughest pitching. The number of times he came up with big hits against interstate and international rivals while playing for WA and Australia was inspirational.”
Kaye Greenham – Baseball Australia Hall of Fame Inductee 2014

“Bob was an extremely productive hitter as evidenced by his accumulated statistics. Bob’s on-base percentage was extraordinary because he was such a selective hitter frequently running up 5 or 6 pitch at bats; he wore pitchers down. Bob was unique in that over his career he produced outstanding numbers in all hitting categories, including batting average, runs batted in and slugging percentage.”
Don Knapp – Baseball Australia Hall of Fame Inductee 2008

“In 1972, baseball in Western Australia and Australia changed forever when Bob Ossey arrived from Oregon in the USA. In 1974 I met Bob and my life changed forever! Oss was the complete professional at everything he did. The Victoria Park Baseball Club was a huge beneficiary of his professionalism. He lifted the standards, expectations and class of a club that had struggled for years. The best coach I have ever had and the best times I ever had on the baseball field were at Forster Park with Oss as our leader.”
Glen Watson – Premiership Teammate, Victoria Park Baseball Club