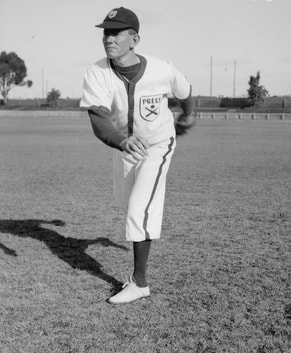 Charlie Puckett was a warrior when he had the ball in his hand, consistently being credited with shutout wins as he went deep into games and never seemed to tire. A member of various states teams and national teams, Puckett was the first player in Australia to represent three different states in Claxton Shield baseball (South Australia, Victoria and Western Australia). He won the Capps Medal in 1936, Landsown Medal in 1937 and President’s Medal in 1938 for each state respectively.

In the 1938 season his State League team won 10, lost one, and drew one that went to 12 innings. Puckett pitched seven shutouts in the 10 wins including a perfect game. In the grand final of 1938, Puckett pitched a shutout to guide his team to victory. In 1939 Puckett continued his red-hot form on the mound, pitching four shutout games during the course of the year including another perfect game.

At the 1938 Claxton Shield Carnival in Perth, Puckett was awarded the Tom Smith Memorial Prize for the best player at the tournament. It was a tournament where Puckett broke the Australian record for innings pitched in a game, spending 16 innings on the mound. However, that didn’t seem to tire him as he batted in the winning run in the bottom of the 16th!

Below is a sample of some of Charlie’s achievements: