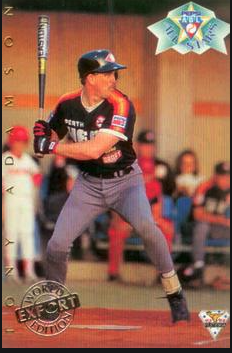 ​Tony Adamson was a power-hitting first baseman for Morley Eagles, Perth Heat, and Australia throughout his incredible career. Adamson “owned” Parry Field. His home runs, both in quantity and distance, are legendary.

He led the ABL in RBI’s three times, slugging twice and home runs twice. Adamson finished his ABL career with a batting average of .316. He amassed 252 RBI’s which, at the time, made him one of only two players to achieve over 200 RBI’s in under 1000 at bats. Adamson retired as the ABL career home run king with 71 and held that spot for two years after he had hung up his spikes.
​
Adamson represented Australia with distinction and was recognised as one of our country’s greatest international players for over a decade. His stellar international career culminated as an Olympian in 1988 at the Seoul Games.

He finished his professional career as a player/coach for the Perth Heat, producing an impressive 81-38 record. Truly one of Australia’s all-time greats!

Below is a sample of some of Tony’s achievements:
“I was lucky enough to be a frequent attendee at Parry Field during the career of Tony. Spectators never left their seats for the concession stands or the restrooms when Tony was coming up to bat. Nobody wanted to risk missing him launch one of his many home runs onto the bank over the left field fence. His hitting prowess and power created excitement and anticipation amongst the Heat supporters and fear in opponents. Tony’s abilities went well beyond his exploits in the batter’s box. His defensive skills at first base saved many runs for the Heat throughout his career. Elite performances year after year at the club, national and international levels firmly entrenched Tony in the top handful of players of his era. His offensive stats and records speak for themselves and clearly position Tony as one of the all-time best hitters to have played the game in our country.”
Bob Ossey - Baseball Australia Hall of Fame Inductee 2017.

“One of Australia’s all-time great power hitters. Tony was a consummate professional…always ready and studying the game. He was a home run and RBI machine.”
Graeme Lloyd – Baseball Australia Hall of Fame Inductee 2005

“I was able to watch Tony’s development in his various roles as a player, team leader, and coach throughout his career. Tony brought three key ingredients to the ballfield: superior athletic ability, competitiveness, and a burning desire to be the best. Tony could have excelled at any sport of his choosing, particularly AFL, but baseball was his passion. In the prime of his Claxton Shield/Perth Heat career, Tony was the most prolific power hitter in Australia. However, Tony contributed much more than power to the team; he was also an on-field leader, performed well under pressure and possessed great game knowledge. I rate Tony as the best locally produced WA player of his era.
Don Knapp – Baseball Australia Hall of Fame Inductee 2008

"Ado could just flat out hit! He hit for average, took his walks and was the best power hitter in the country throughout this career. He had amazing power driven by a beautiful, rhythmic swing. Tony had the ability to understand how pitchers were trying to pitch to him, wait for a mistake and then make them pay!
He was a super aggressive competitor, outstanding 1st baseman and an excellent baserunner.  Playing 2nd base next to him on the Heat was an honour. He taught me so much in such a short time. When he spoke and gave advice players listened. I was lucky to have him as a teammate, coach and mentor."
Jason Hewitt – Baseball WA HOF Inductee 2021